DE
Farm
La CANTINA Relais
Our Products
Are you a Gourmet ?
Farm holidays
About Us
Find us
Contact us 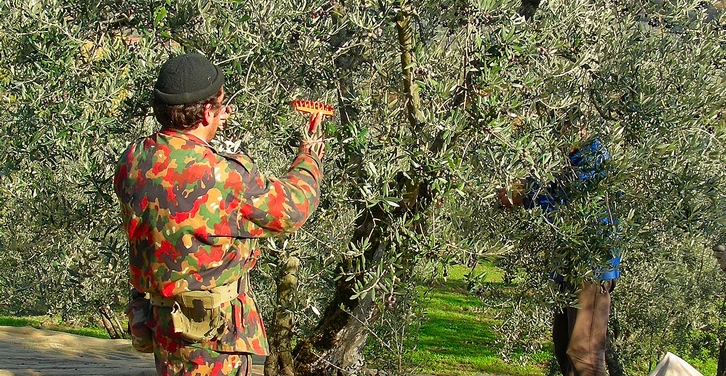 The olive trees are generous plants!
This year was a special year for the olive trees, the flowering of June was magnificent, and the sunshine and light winds have allowed a uniform pollination, the spring rains did the rest and young olive berries have appeared numerous among the branches.
In August, however, we completely missed the rains and the plant began to suffer from drought and the biggest olives have already begun to wrinkle. This is a phenomenon that occurs when the olive tree is suffering from drought and it starts to use the water in the grapes for his survival, the olive so decreases in volume and changes in appearance, his "skin" from smooth and bright becomes rough and opaque. Usually at this time the olive tree is ready to make "choices" by removing the olives that will not necessarily be able to cultivate due to lack of water. We cannot do anything, in fact even if we could water all plants, what is impossible, the olives would fall anyway, so usually we expect that the olive tree, hoping that the plant make later its "final choice".
The first days of September came the rains which led to a lowering of temperatures and abundant irrigation on all the olive trees, the next few days for the farm have been days of waiting... In fact, these are the days when the plant decides the fate of its fruits! Usually when the sap begins to flow throughout the plant abundantly, the smaller and more suffering olives are off by halving the crops.
This year something unusual happened, olive trees have resisted and have decided to bring all olives to fully ripe. No oil has fallen and now even that harvesting has begun the olives are firmly on their "picciolo" (stalk on which hangs the olive). Thanks to the generosity of this ancient plant this year perhaps we will have a harvest among the most abundant of all the years! Will keep you updated ....

Register and discover the benefits

Secure Payments Why to register ? Product Guarantees Our Deliveries